Despite a decline in ivory trading, elephant populations were falling. Although there was no media budget, a way was needed to re-ignite concern and donations for elephant welfare. The solution was to create a unique opportunity to re-bond with elephants via an app that translated human words into elephant signals. The app triggered huge media interest and social sharing, motivating people to donate. An estimated 400m media impressions were generated and donations rose by 34% versus a 10% target. Almost 4,200 new supporters were recruited and $1.28m of incremental revenue delivered. The long-term profit ROMI was projected as Â£19.10 for every Â£1 invested.

Hello in Elephant is an impressive piece of work. Recognised throughout The David Sheldrick Wildlife Trust as both beautiful and impactful. Impactful: As our struggle to save elephants in Kenya and East Africa grows, so does our challenge to attract resource. We need more funds, yet itâs never been more difficult to secure new supporters and donations. Weâre not just competing in a crowded and frankly cut-throat environmental charity space, with organisations who have vastly superior reach and resources, but with every other worthy cause that demands peopleâs attention. This idea achieved penetration in a noisy market and generated significant impact for the organisation. Beautiful: We try over and over to get people to feel for the cause by understanding how magnificent elephants are. Yet, outside of the limited numbers getting up close to orphan elephants at our Nursery and Reintegration Units, itâs difficult for people to truly appreciate elephants. It was the beautiful fusion of creativity and technology that gave us an incredibly powerful way for the world to emotionally connect with elephants by experiencing how special they are. We gained empathy on a mass-scale through this experience. Hello in Elephant has given impetus to the organisation to continue to explore how we can collide creativity and technology to not only reach and engage new supporters but change how we operate and protect, rescue, raise, and release elephants back into the wild. 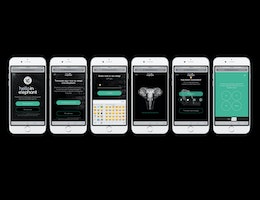